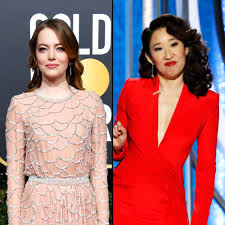 During Andy Samberg and Sandra Oh’s delightful Golden Globes monologue (it was technically a duologue, however “monologue” is the thing that you call these things at any rate), the pair joked that Crazy Rich Asians was the principal studio film with an Asian-American lead since Ghost In The Shell and Aloha—a nod to the way that both of those movies really had white ladies playing Asian characters. Emma Stone, who played Allison Ng in Aloha (a character who was composed as part Chinese and part Hawaiian), happened to be in the audience at the Globes, and she took the shoutout as a chance to address the controversy without precedent for the first time in years by shouting “I’m sorry” loud enough to be heard on TV. The Los Angeles Times even got confirmation from Stone that it was her who said it, with her saying, “It wasn’t like I planned it, but I did say it.”

Presently, if just NBC had really sliced to Stone when Samberg and Oh made that joke so we could see her saying ‘sorry’ for playing an Asian lady, it would’ve landed superbly.

The super funny Covid-19 R&B playlist by R-Cue is going viral on Facebook and is what everyone’s talking about, and…